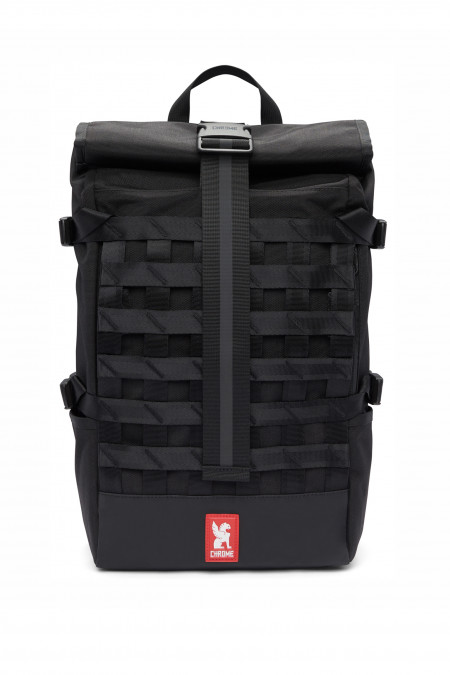 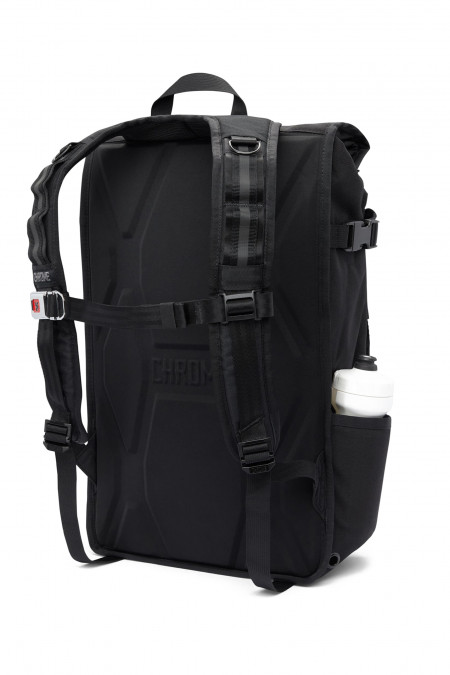 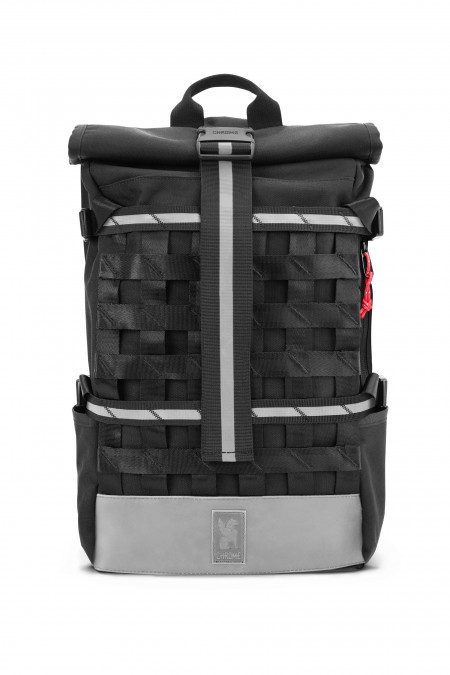 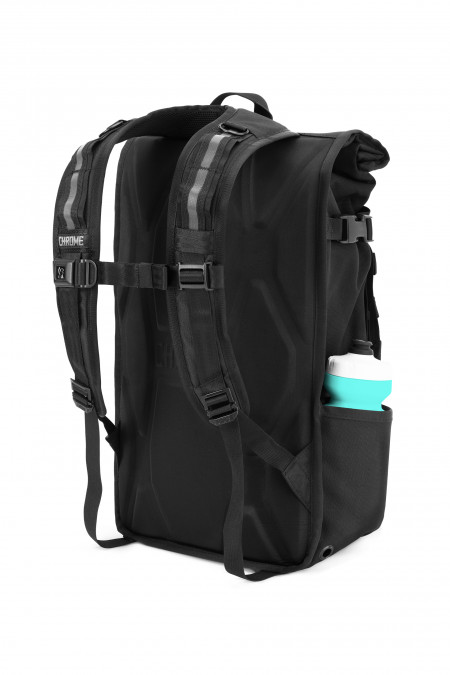 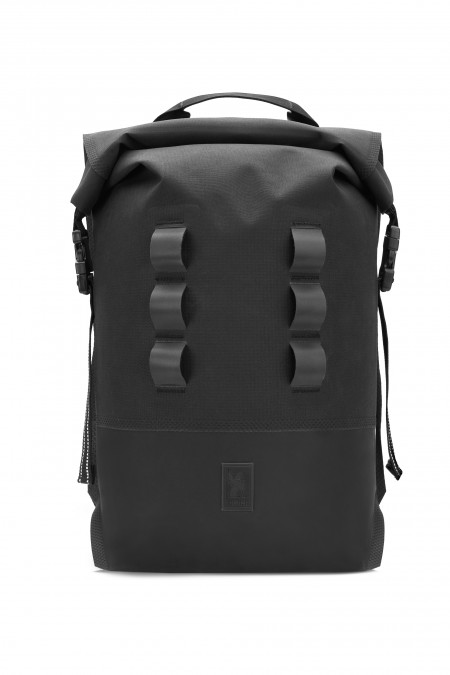 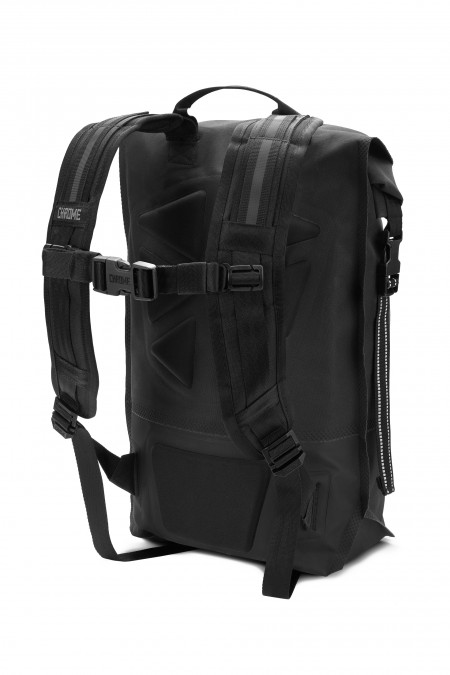 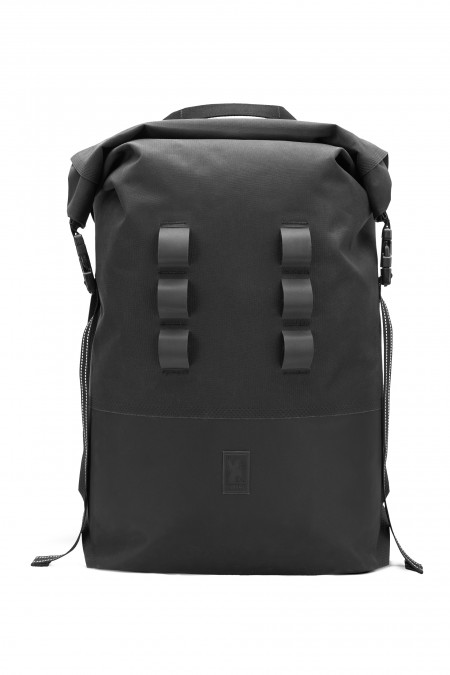 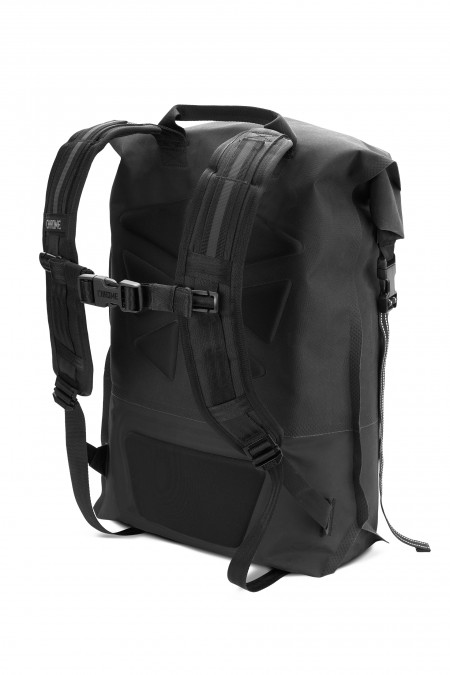 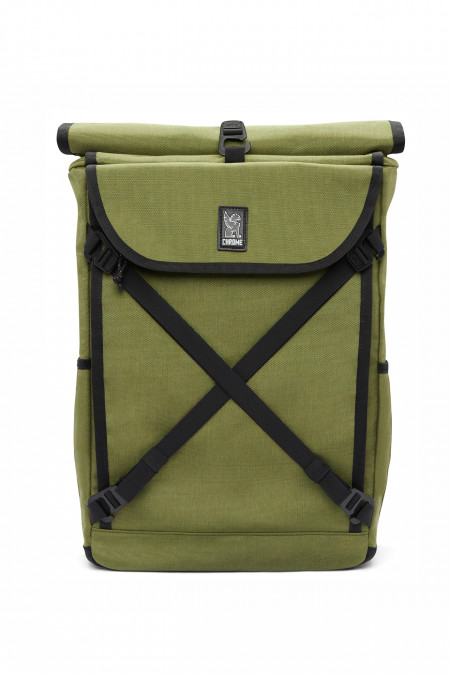 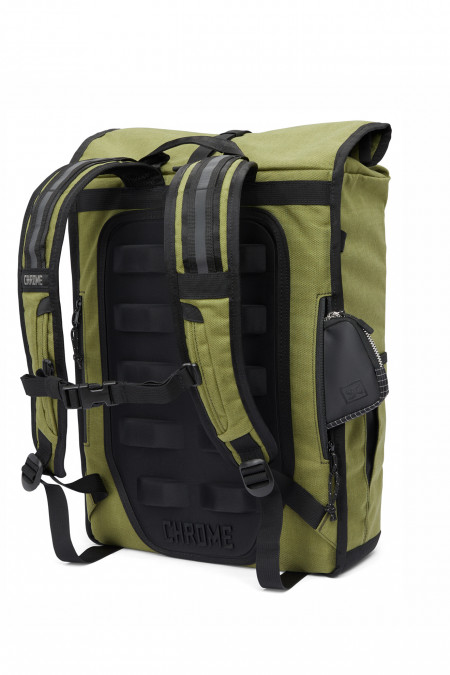 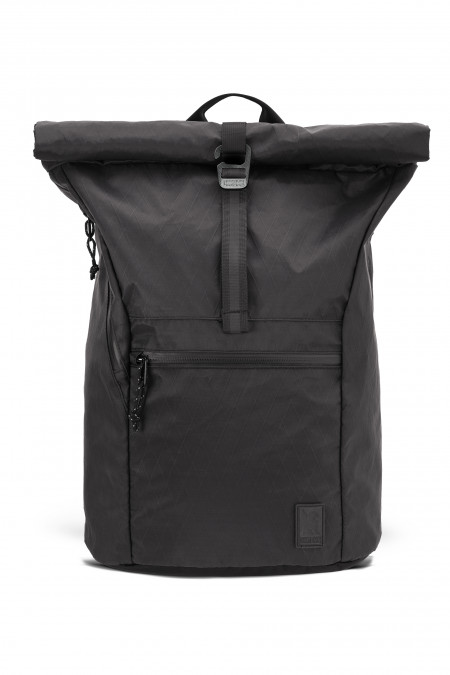 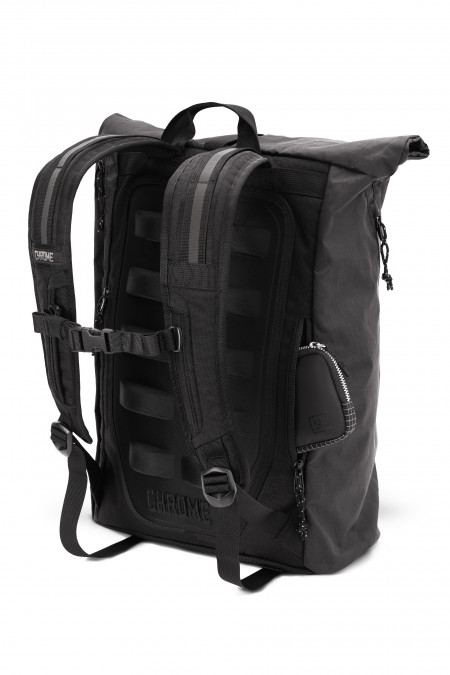 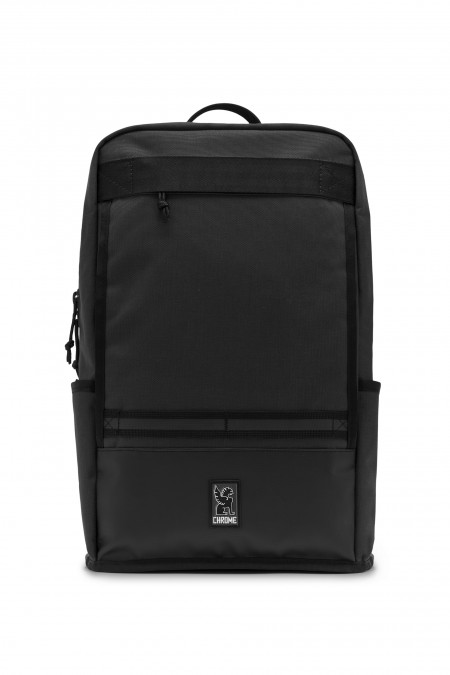 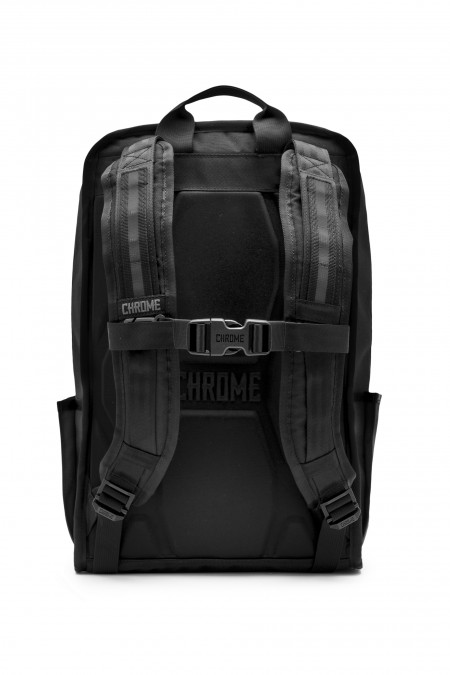 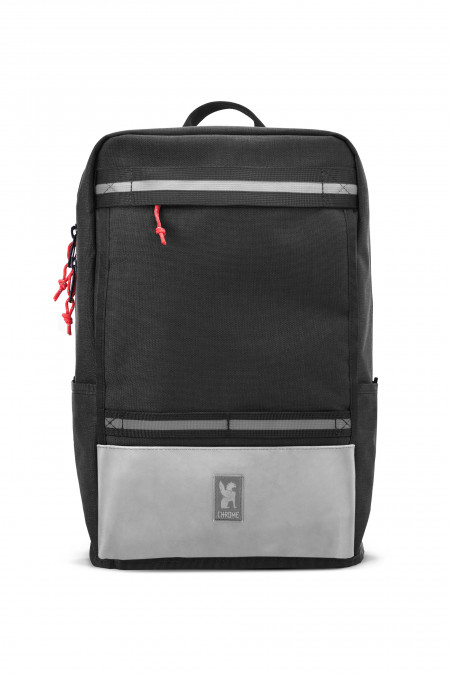 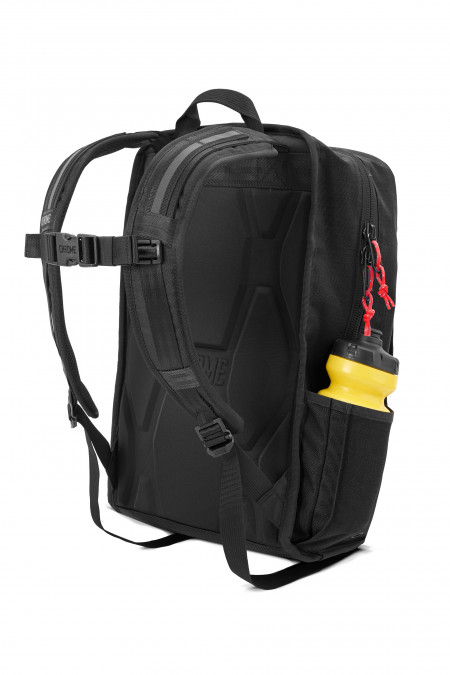 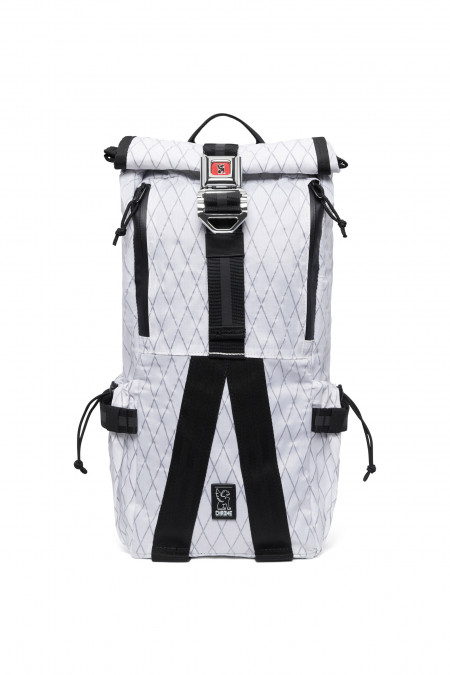 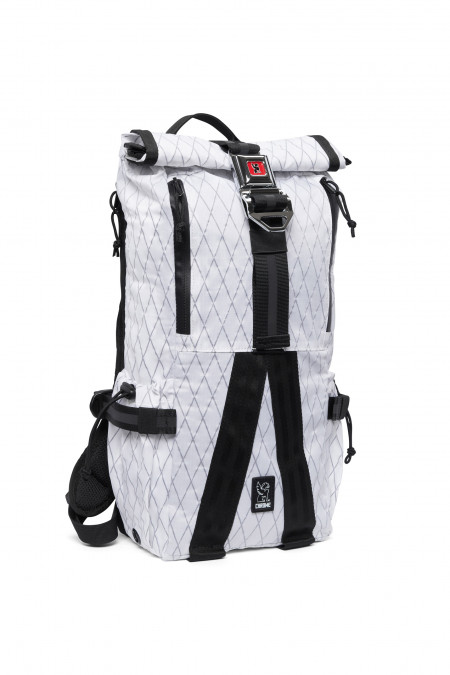 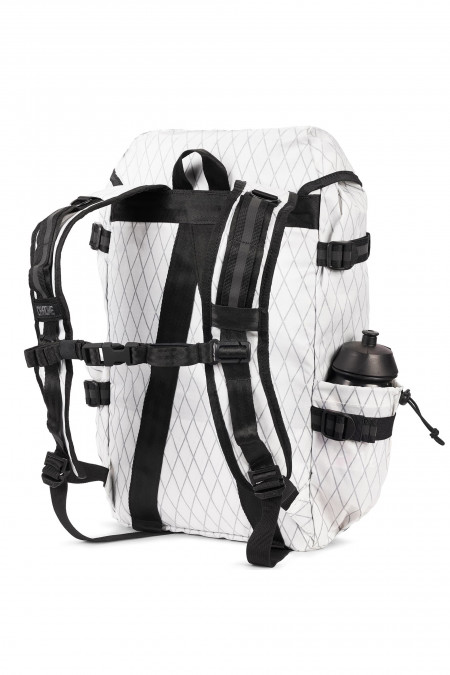 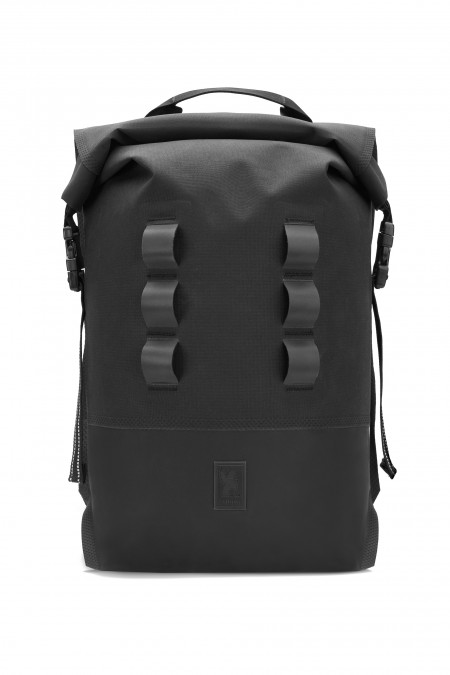 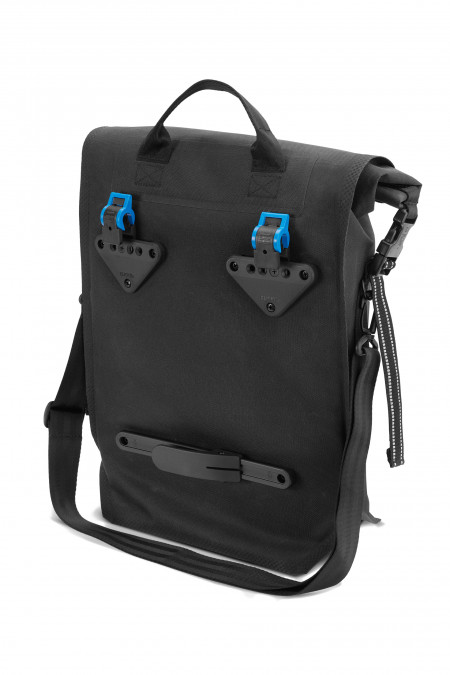 Cycling backpacks for urban cyclists and couriers all over the world. Chrome Industries or a rallying call that makes your brakes squeal.

Chrome Industries: the Mecca of cycling

If you're a keen cyclist you've probably already heard about the Americans from Chrome Industries. Since 1995, the brand has equipped and dressed countless cyclists around the world. At the handlebars of the Chrome Industries brand: Bart Kyzar and Mark Falvai, cycling and design enthusiasts. Clearly, they aren't here just for the sake of it, but rather to offer versatile and sturdy cycling backpacks for their cycling buddies. The guys started their brand from scratch: no budget, no capital-raising, no crowdfunding campaign. A small Jeki sewing machine, some industrial nylon offcuts, a military truck tarpaulin and safety belt buckles, that's all: the brand's iconic messenger bag was born. It just goes to show that sometimes with nothing you can do a great many things. And it's just as well because in a way it's their principle: “Freedom through limitations.” Since then, the guys from Chrome Industries have made their mark. Packed with new designs, a textile range for cyclists' clothing and collaborations with the cream of creative brands such as Upper Playground or Blue Lug. The creators continue to emanate this air of freedom and hunger for motion shared by all bicycle couriers around the world. Made in the United States and guaranteed for life (that's right!), Chrome Industries backpacks are clearly devised and designed for bicycles. In their sights: couriers, urban cyclists, commuters and alleycat (urban orienteering courses) fans. Durable and waterproof, Chrome Industries backpacks are perfect for everyday use and for carrying your computer, for example. The fastening systems, shoulder and other straps ensure excellent hold when riding, almost as if you and the backpack have merged to form one whole. Thank you who? Thank you sternum strap? To attach a speaker, a water bottle, or a bicycle lock, some models, such as the Barrage Cargo, are equipped with the Molle military fastening system. Other equally practical and functional models, such as the Urban EX Rolltop Chrome Industries, are equipped with straps that you can use to attach a bicycle lock or other items you want to keep close to hand. You can load your bag without any fear of tearing since Chrome Industries bags are mainly made in high-quality and sturdy technical materials. On the programme for the ride: 1000D Cordura®, Hypalon® and 600D nylon. And the cherry on top: to be visible on your bike, even at night, reflective strips have been added to the outside of some Chrome Industries bags.

Chrome Industries: the essence of urban life, the taste of bitumen

To build its universe, the brand has drawn its inspiration from modern-day cyclists in the urban jungle. As the saying goes: “We are the city”. Behind the minimalist exterior of Chrome Industries cycling backpacks lies an ingenious interior storage system. Store your laptop in a protective compartment, access your belongings quickly and organise the contents of your bags efficiently. Another thing we particularly appreciate is the quality of the seams which ensure that Chrome Industries backpacks are completely waterproof. And by seam, we should point out that the word welding is actually more appropriate since, to assemble all the parts of their bags, the guys at Chrome Industries use the high-frequency welding technique. Another option chosen by the brand: the so-called bartak seam. This zigzag stitch ensures that the bags are extremely sturdy. In particular, it is privileged for assembling parts which will endure many constraints and movements, as is the case of the various straps. Clearly rooted in an urban lifestyle, Chrome Industries has developed its own unique philosophy of “working hard, playing hard and riding hard”. No compromise for these work and cycling addicts who are continuing to explore other areas such as music, art, music, photography, and skateboarding in order to ensure that their brand is constantly up-to-date. On the KEUS online store, discover a selection of Chrome Industries cycling backpacks and messenger bags. On the programme for the ride: the brand's star models available in several colours, shapes and sizes. Also, be sure to read the full test of the Chrome Industries Daypack by Thomas, the founder of KEUS. For more articles, visit the Crash Test section of our journal. And if you have any questions, contact us via the live chat. We're always happy to advise you! Login to your space